The Life of an Agency Owner 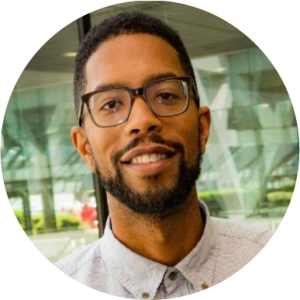 Jeremy Johnson always had the #HustleCity mentality. For years he was working 3 jobs at a time. Bartending, delivery gigs, a salary job doing web design, and every odd job he could pick up.  Eventually, Jeremey had had enough. He started out on his own and began doing what he knew best – web design. Jeremy was killer at web design and landed his first few clients on his own. He had found just enough work that he was ready to quit his job. Even though Jeremy was great with web design, he didn’t know everything about business. That’s when a friend suggested Jeremy should check out Hatch. He showed up to Coffee Downtown and met the team. 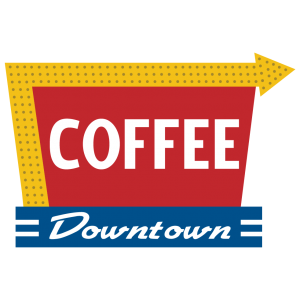 Jeremy met other entrepreneurs and the Hatch team and eventually told us about his new company: JohnRich Media. He had just taken on his first few clients but didn’t know where to go to find more. Jeremy got some good advice that day from other entrepreneurs. So Jeremy joined 1000 Four to continue meeting other entrepreneurs and learning from their experience. Jeremy wasn’t quite sure where to start so he messaged in the open forum for some help. Pretty quickly he was directed to the “Customer Discovery” resource on 1000Four.com. Jeremy was hungry for knowledge though and watched “How Can You Find Prospects Today,” filling out the accompanying worksheets as he went. He took what he learned and in a few weeks he had doubled the number of leads he had. 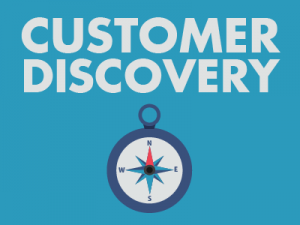 Jeremy had found a good method of producing new client leads and slowly but surely he was turning them into customers. After a little over a year of being out on his own JohnRich was growing nicely. That’s when he finally landed one of his most personally rewarding clients: his old employer. Jeremy used to work for the local public school system and in just over a year they were now a client. In Jeremy’s own words: “Few things in building my business were as rewarding as that.”

This new client that Jeremy had landed had quite a bit of work to be done. So much so that Jeremy was ready to hire his first employee. He didn’t know where to start so he used his secret weapon: 1000Four.com. He hopped on a searched for some help in the hiring process. Just what he needed: “Finding Your Next Team Member.” 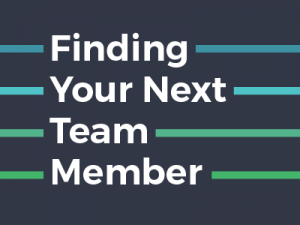 Fast forward 3 years. Jeremy has been growing JohnRich Media with the help of 1000Four and has expanded from simple web design to video ad development (for tv and the internet), ad placements, social media management, and more. His team has grown 3 times over and he’s got clients nationwide. Join Jeremy and hundreds of other entrepreneurs in 1000Four.

Jeremy is a 1000 Four Champion 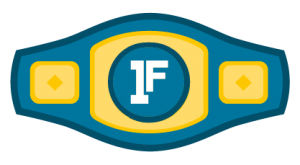 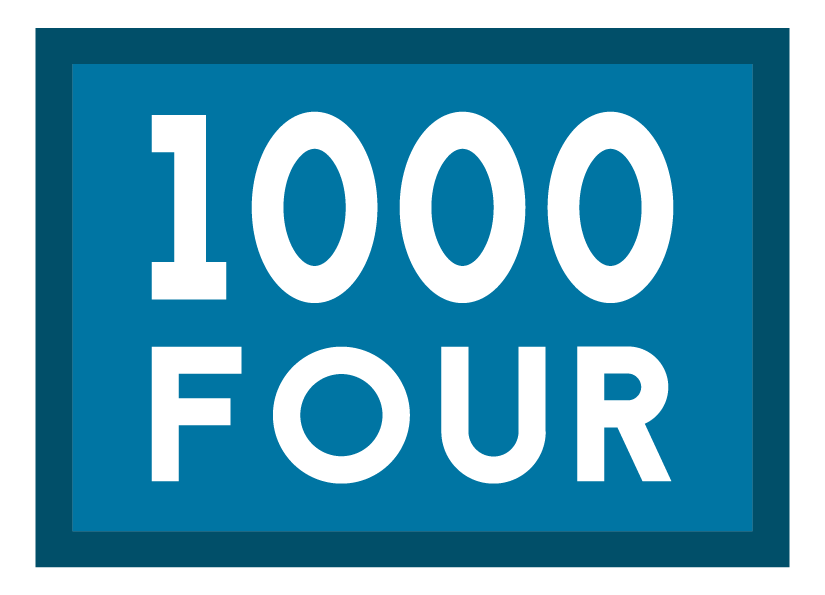 Everything you need to start or grow your business

You don’t need a degree in business to start a business. Learn how you can become a business expert without leaving your house.

Featuring nearly 100 curated experts focused on sharing solutions to common problems. There’s no textbooks, only experienced entrepreneurs or industry experts. People who have 'been there, done that' providing ready to use tips and lessons.

Multiple ways to learn from and interact directly with thousands of other entrepreneurs and small business owners to ask for advice, share struggles and challenges and even celebrate wins. 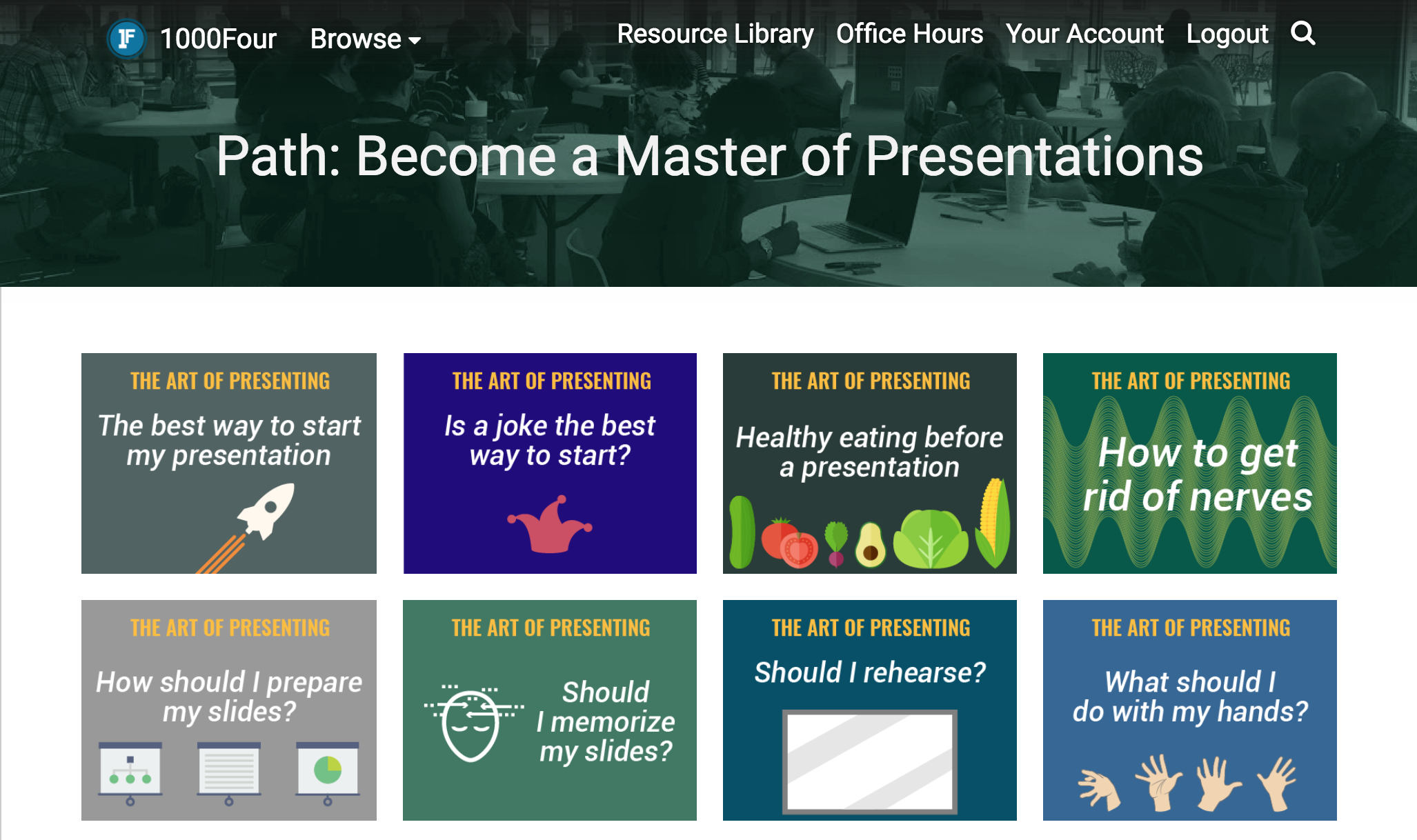 To help you achieve specific goals. You can still browse through the entire library, but we’ve built pathways to help keep yourself on track.

Editable worksheets and other downloadable resources 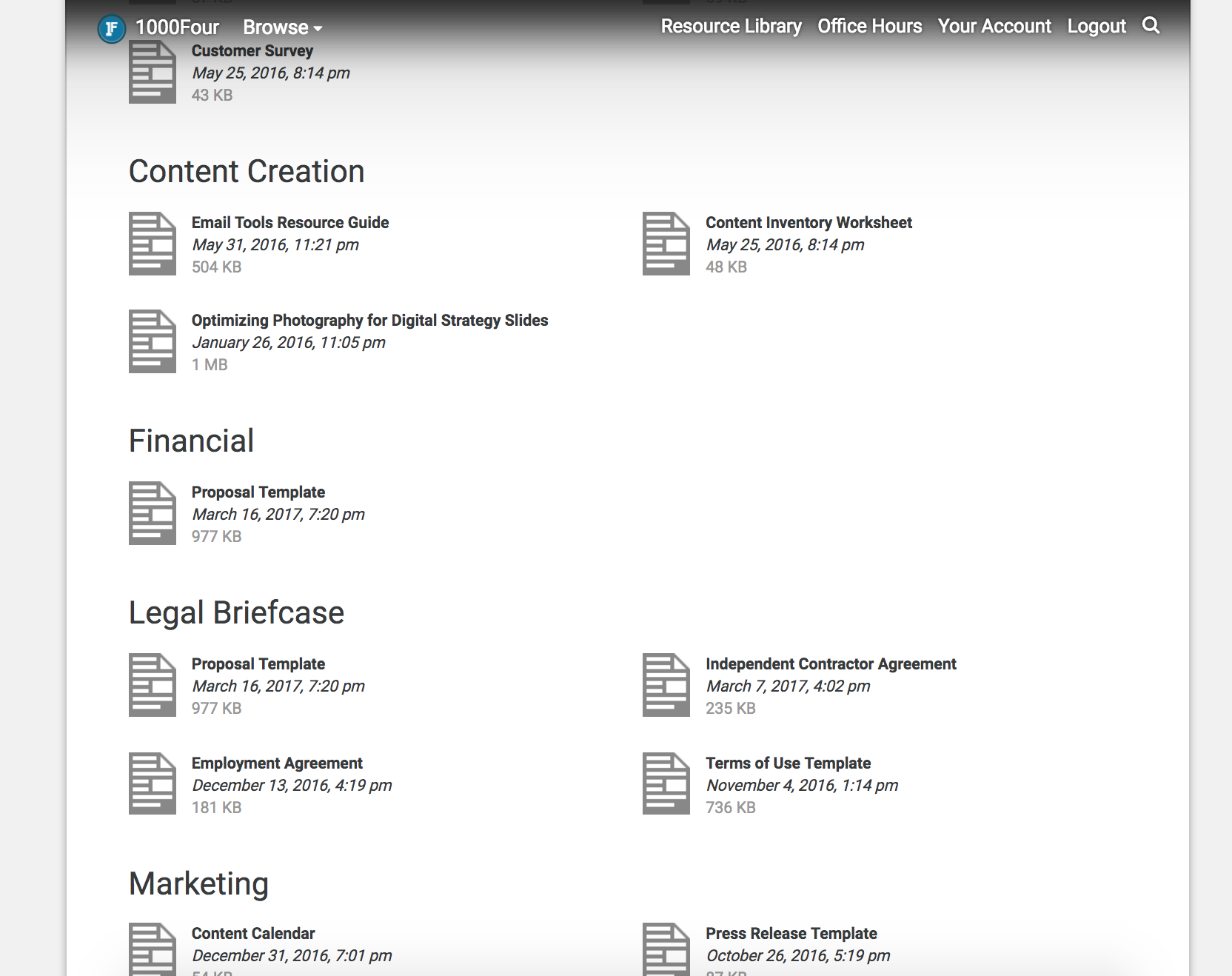 That entrepreneurs and business owners can fill out to help them retain and apply what they've learned or save time creating things they need in their business.

Here are a few samples of the hundreds in our library. 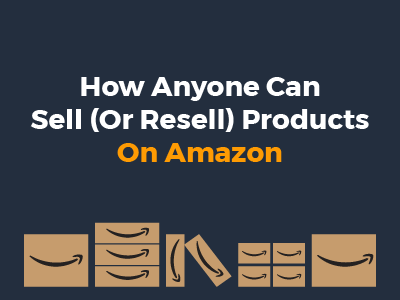 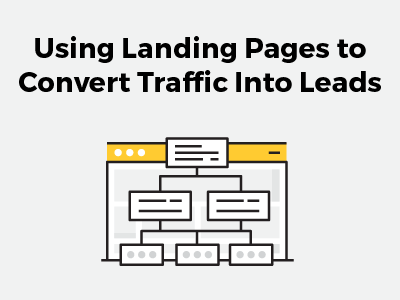 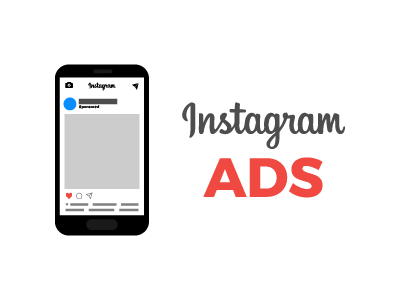 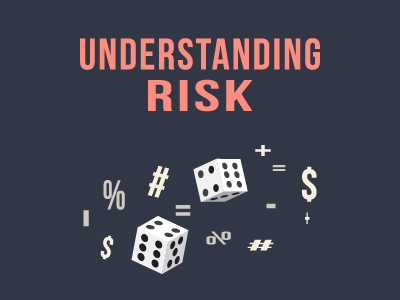 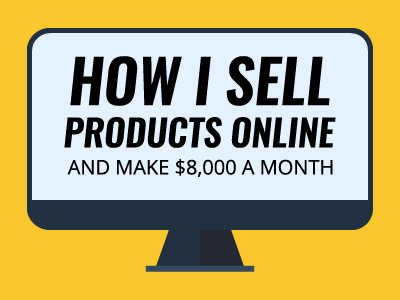 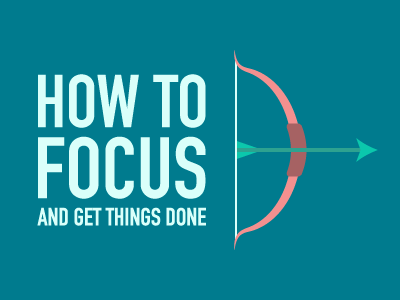 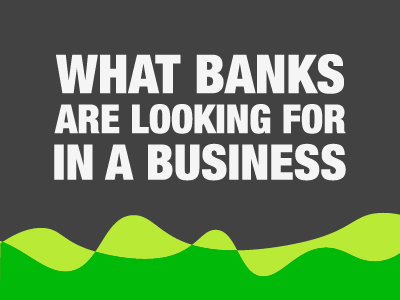 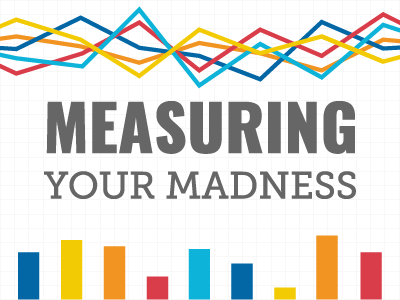 Here are a few samples of the dozens in our library.

How To Start Your Business

How To Grow Your Business

Become A Master of Presentations

It all started with a Ted Talk...

If you’re reading this post, you’ve probably already seen startwithhatch.com/1000four, describing all of the awesome episodes, perks, and community you get as a member of 1000 Four. You’re probably still a little confused though.

You might be wondering “What in the world does 1000 Four mean?” Well a few years ago, I was invited to sit in on a meeting to discuss how to best help our local economy. Someone in the group mentioned that if the region could just bring in 4 companies with 1000 employees each everything should be great. That didn’t sit well with me. I knew there had to be a better way. I was already helping local entrepreneurs grow their businesses at Hatch, but that comment changed my mindset. I realized that growing 1000 companies to four employees big wouldn’t be as good as their strategy. It would be better. Growing 1000 companies with four employees would be more diverse, more nimble, more grassroots, and more local. Instead of 3996 employees, we would have 1000 business owners.

We’ve set out to create a platform for entrepreneurs to learn from one another, to enable everyone to start and grow a business, to put the fate of your business and your community in your hands. Over the past few years we’ve had the privilege of helping thousands of companies. Let us know how we can help.

We have content that covers virtually every point in the business lifecycle. From accounting and legal, to marketing and content creation. If you need specific know-how on something related to business, chances are we have several pieces of content that can help you. 1000 Four is a tool that will help you get more customers, and expand your business. The community and network effect of the 1000 Four program is immense. Imagine tapping into a group of hundreds of other entrepreneurs and small business owners. The ability to collaborate, ask advice, share goals, and get support is nearly priceless. The more members, the more everyone benefits. You'll be able to get feedback customized to your unique situation. Google searches aren’t enough. You need help tailored to your specific business and situation. These are real entrepreneurs helping you find solutions, meet your goals, and grow your business.

All of our content is available on-demand. We understand that a lot of you have day jobs and are maybe only able to work on your company late at night or early in the morning. We’d all love to make it to all of the workshops going on around town, but taking off an hour or two in the middle of the day is just unrealistic. We solve that problem by making everything we produce available at whatever time is best for you.

Who is this platform for?

1000 Four is for anyone who wants to have hundreds of experts in their back pocket. There are a lot of people who are good at one specific thing (i.e. baking cookies) but don’t necessarily understand the business side. 1000 Four solves that problem by providing our members with top-notch content, directly from the experts who have been there and done that. On top of that, 1000 Four allows you to surround yourself with other entrepreneurs who are going through the same struggles with you. Use them to bounce ideas off of, ask questions, or just as someone to lean on when times get tough.

Where should I start?

Start by telling us more about your business here. Once we know more about you and your current struggles, we’ll be glad to point you in the right direction. If you’re ready to jump in on your own, head here and navigate our extensive library of content.

Anywhere that you have an internet connection! 1000 Four was built to be available anywhere, and at any time. Whether you’re on your desktop, your laptop, your tablet, or even your smartphone, 1000 Four allows you to have amazing content and community at your fingertips.

What if I want to meet 1-1 with Zack or the Hatch team?

You can ask questions in our private group, attend office hours, and interact with other users online. If you need 1-on-1 help, email us to set up a time to chat.

What if I’m signing up as an institution?

If you are an institution or enterprise and wish to get access to 1000 Four for your members, go here.

What Our Customers Are Saying

Don’t just take it from us, let our customers do the talking!

The value 1000 Four creates is tremendous, not only with the tools and resources, but the community of other people in my shoes fighting the same battles. It’s nice to know we’re all in this together.

Being able to communicate with the community about specific points to my business has been essential in its growth. We are now seeing 400% growth month to month because of it. Essential!