Why the Hunt For Amazon Will Kill Your Local Economy 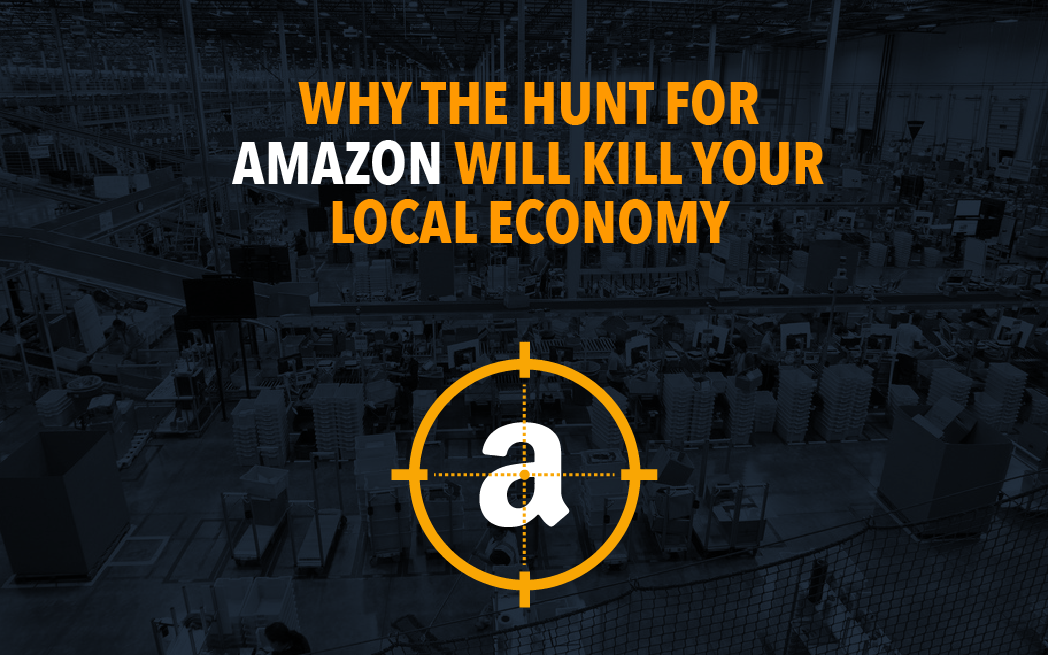 If you haven’t heard about the search for the Amazon HQ2 city, then you’ve probably been living under a rock. Every mayor and economic development leader has been wringing their hands trying to figure out how to win over Amazon. While this will most likely go down as the biggest economic development decision of the decade (and more), there are hundreds of other corporate movements happening every year. Cities and their economic development professionals fight to win these deals with tax incentives, grants, expensive consultants, land deals, and more. All together it’s an industry of over $80 billion.

The issues with “Big Game Hunting”

The problem is that these deals, known as ‘big game hunting,’ aren’t typically the best form of economic development. A bottoms up investment in local companies (we’re calling it the 1000 Four Method) can provide much better results for a city.

Big game hunting, involves a game of winners and losers. Hundreds of millions of dollars go out to door to 3 or 4 companies while thousands of small and growing businesses get mostly lip service from their leaders. Not only are these corporate relocations typically removing jobs from other communities, but a company willing to move to your city on a tax break is probably willing to move to the next city for a bigger tax break.

Meanwhile, your city’s leaders are betting millions of taxpayer money on just a handful of companies. If this was your retirement portfolio, would you be ok with your advisor putting all of your savings into just 3 or 4 stocks? It’s basic financial literacy that a diversified portfolio is crucial to successful returns, yet hundreds of cities in America are putting all their eggs in a few baskets.

Studies show that the returns from these practices are dubious suggesting that tax incentive deals at best work only about 10% of the time, being a waste of money the other 90%.  Luckily, economic development doesn’t have to look like this. In most metropolitan areas there are tens of thousands of businesses. If, on average, each of those businesses could add just 1 employee in the next year or increase profits 10%, that would have an effect just as good and probably better than a large corporate headquarters attraction.

This is the 1000 Four method. Instead of attracting 4 companies to bring 1000 new employees each, helping thousands of new and established businesses add around 4 employees.

Imagine an economy full of small, nimble business teams that span dozens of industries able to rapidly adapt to market pressures and innovate. Imagine the vibrancy of the community when everything from the local sandwich shop and Etsy vendor to the SAAS and iOT companies are thriving.

The value of human capital

I know what you’re thinking: “This is a pipe dream, no city is going to give cash to thousands of entrepreneurs.” You’re probably right about that, it would be insanely tough to make cash investments in that number of companies. However, it’s much easier to invest in the human capital of all these businesses. Information is highly scalable, cities can and should be providing the best business education tools and resources to their business owners.

Human capital not only sticks with individuals when they move companies or a startup fails, making it a nondegradable investment, it is also most beneficial to small teams. Small businesses typically have team members filling several roles, meaning they need a much more diverse knowledge set. They can fill those gaps with the access to the right educational resources. It also levels the playing field for those aspiring business owners who don’t have access to expensive educations and successful mentors.

Would you rather your city invest in the success of every current and aspiring business team or line the pockets of a few big corporations from out of town?

The bonus here is that any city could be making world class business education, resources, and tools available to every business owner and their teams for fractions of the amount they spend on big game hunting.

We can boost our local economies substantially and we can do it without fighting over Amazon HQ2 deals. We can build 1000 Four-employee businesses and be better off for it.

For more info on The 1000 Four Method and why I think big game hunting is wrong, check out https://startwithhatch.com/method