When There’s A Gold Rush Sell Picks and Shovels 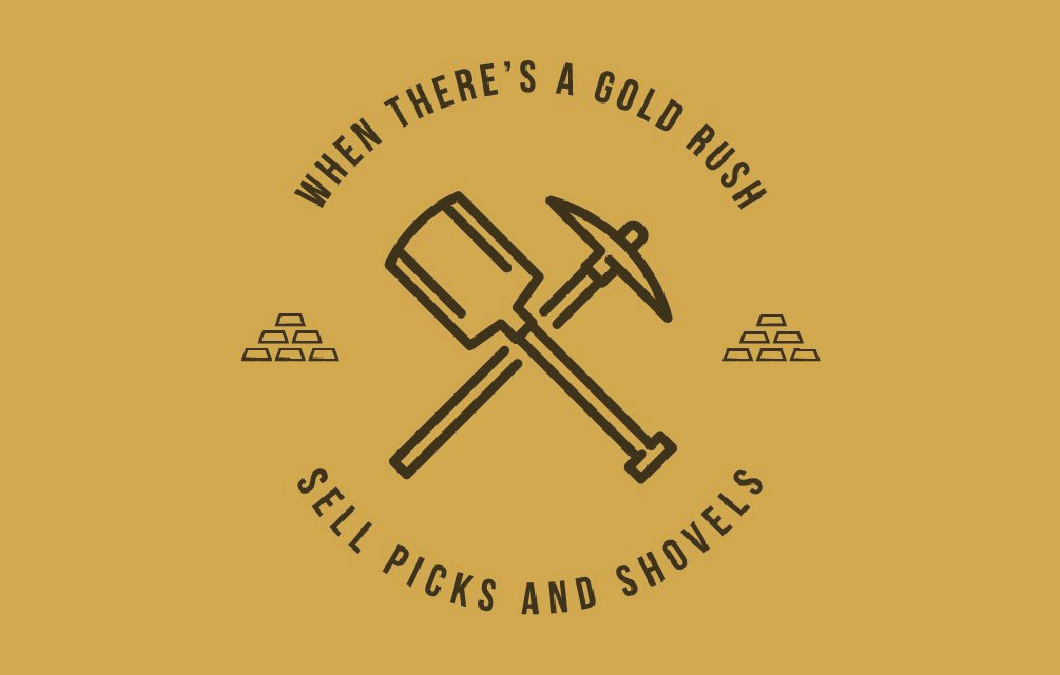 Sometime in my young adult life, I heard some advice that has stuck with me. I don’t really remember who said it, where I heard it, or why it came up. I do remember the message though because it was so important to an entrepreneurial mindset. The saying goes “when there’s a gold rush sell pickaxes and shovels.”

During the California gold rush, thousands of entrepreneurs and land speculators ventured out west to try and strike it rich. The truth is that most of them never struck it rich and were victim to a lot of hype and a crowded and competitive market. Gold was the glamorous business, the shiny get-rich-quick strategy. Gold was actually an incredibly risky venture because it involved buying expensive land with slim chances of it holding gold.  The entrepreneurs who made the most off of the gold rush didn’t go down that path. The ones who built great businesses were selling pickaxes, shovels, and everything else that those thousands of gold rush dreamers needed. Levi Strauss, Samuel Brannan, and John Studebaker were among the entrepreneurs who built incredible business off the gold rush, but not gold.

This advice doesn’t just apply to the gold rush. There are always going to be hot industries hot products, and glamorous opportunities that everyone and their mothers chase after. Don’t buy into all the hype. Instead find the opportunities just outside of the hype. Sell complementary goods and services instead. When demand is skyrocketing for gold, demand will also be skyrocketing for pickaxes and shovels, but (hopefully) much fewer people will be chasing those markets.

The best entrepreneurs don’t follow the crowd. They don’t get mesmerized by the shiny industries full of fame, glamour, and glory. The best entrepreneurs find opportunities that aren’t obvious, opportunities that everyone else missed. When everyone is clamoring after the automobile industry someone was selling tires and setting up auto parts stores. When PC’s got hot, someone was making small fortunes selling mouse pads and floppy disks. When mobile phones took over the world, someone else was killing the game selling phone cases.

There’s no shortage of hot industries today too. Everyone dreams of selling electric cars, becoming a video game visionary, starting a biotech firm, or becoming a drone mogul. Are you going to follow the crowd of blaze your own trail?

By the way, someone should really be starting a business for drone landing pads, is that a thing yet?