Reacting vs. Responding – What You Need To Know 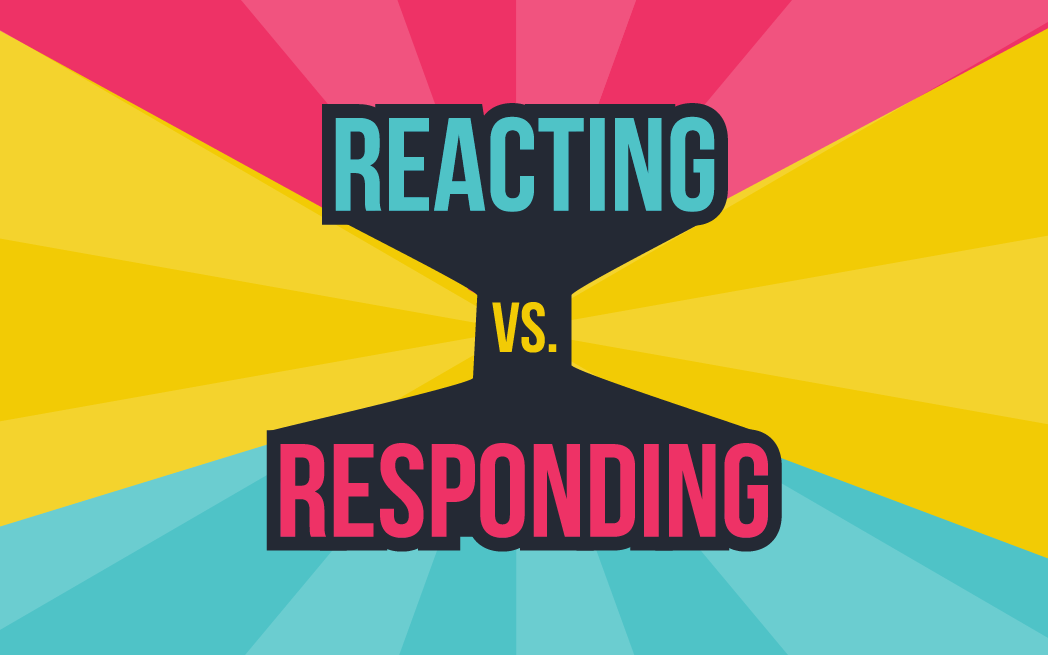 Reacting vs. responding. At first I thought reacting and responding were basically just different words for the same thing. They are actually very different. Reacting is fast and visceral. Reacting is automatic and involuntary. Reacting is our instincts in action. A response requires your attention and concentration. A response is thought out, measured, and not made in haste. Responses are deliberate.

That difference might not seem particularly useful at first glance but it can have an extraordinary impact on your life. Reactions are often rife with emotions and emotions cloud your mind from your better judgement. If you are reacting to a situation, you’re probably doing it almost immediately after that situation arose. In the immediacy of a reaction people are prone to making assumptions, inferences, and even conclusions in haste. In those moments of unrestrained reaction we fall prone to making serious mistakes. These mistakes can take many forms but some common ones are as follows:

Even in seemingly sober moments, we often assume a cause-effect relationship between two events that happen in a certain order. More often than not these relationships we imagine are just happening by chance and represent an incredibly statistically insignificant sample.

When we have one personal experience or hear a story about a situation, we can unnecessarily generalize it. Taking one instance and projecting it onto other similar situations is a dangerous fallacy and one that is often made in reactions.

Subjective confidence is a feeling and not a reasoned judgement. Instead of having proof, evidence, or a rational argument this confidence is coming straight from the gut. Just because you feel like something is right, that doesn’t mean that it is.

Those are just a few of the mistakes that we leap into when we react to a situation. But what does it really mean to respond? Well the easiest step to take to avoid reacting is to take time. Take a step back and really take a few minutes to consider the situation. For a lot of people, just removing yourself from the immediacy that induces reactions is enough to entirely change how you react/respond. Here’s some other helpful tips on responding well:

Don’t let the specifics of a situation cloud your judgement. Go back to the big picture, the grander scheme, and put the situation in context of everything else. Remember to take into account your goals and objectives you’re trying to accomplish. Think about what happened before and what happens next.

Recognize all of your choices

In the fury of a reaction we tend to oversimplify. If you take a few moments to think, you probably have many more options that you initially realize. Even if you feel totally sure some options are not worth your consideration, take the time to weigh all of your choices. It’s ok to still go with your first choice, but you’ll avoid the overconfidence of a reaction.

Anyone could tell you hindsight is 20/20. So try to create that hindsight. Remove yourself from the immediacy and imagine looking back on your decision after the fact.

Emotions play a huge role in reactions. That doesn’t mean you should write them off altogether. Ask yourself what emotions you feel in that moment, and ask yourself why you feel that way. You can’t and you shouldn’t ignore your emotions but don’t let them drive your answer on their own. Emotions can inform you of your own intuition and can show you why you feel so strongly for a particular choice. Recognize emotions, learn from emotions, don’t base your decision on emotions alone.
Responding in a rational way is not an easy habit to build, but like any good habit you have to practice and deliberately build it into everyday life. The more you can successfully step away from reactions and make smart responses, the easier it is to do again and again. Responding often means that you take more time and make a choice slower. That doesn’t always lend itself to crisis situations. Police, ER Doctors, and other emergency specialists are actually trained in responding in split second decisions. How do they learn how to do it? They practice those decisions time and time again, and they build deliberate thought processes to avoid reactions. So there’s really only one way to get better. Practice.
Want to learn more about reacting and responding? Check out Thinking Fast and Slow by Nobel Prize winning economist Daniel Kahneman.