What I’ve learned from interviewing hundreds of business owners 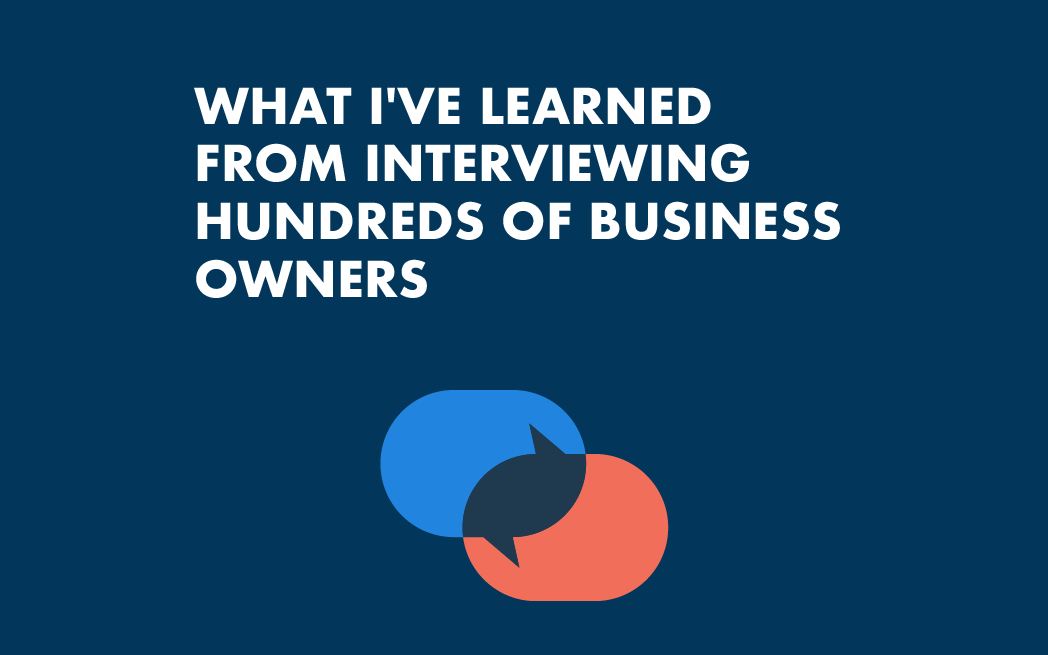 Back in February of 2015, I was trying to help a client, Jeremy Alessi, sell his business, Tunnel Traffic. Our initial discussions were to try and sell it to someone who is currently using it. Lucky for him, the ABC Affliate in Norfolk, WVEC, was using his app on their morning news. I knew the president, Kari Jacobs and sent her a note, requesting a meeting to discuss Tunnel Traffic. We met, she didn’t buy it, BUT, she did ask her own question.

Kari: ‘I’m thinking about starting a business tv show, what do you think?’

Kari: ‘Great, and who do you think should be the host?’

Me: I look at Jeremy and then back and Kari and simply raise my hand ‘I can do it’

Fast forward a few weeks, I convinced her that I was the right person for the job. What I didn’t know is how much I would learn about growing my own business simply from interviewing others.

I received an email from someone a few nights back asking how I do my interviews and any advice for a fellow interviewer. The answer was simple, ‘I wouldn’t call myself an interviewer, I would call myself someone who is genuinely trying to learn from others and happens to ask questions.’

By trying to learn as much as possible in the six minutes I have to interview a guest, I try to pack the punch. I’ve learned way more than the 13 lessons below, but these are the most impactful.

1. “When you hear no in business, it’s really just an absolute maybe” — Daymond John, FUBU

Hearing no can suck, but if you treat it as a tool, you can learn a ton from it. From the words of Shark Tank investor, Daymond John, ‘hearing no in business is simply an absolute maybe’. What you do with hearing no is the key. If you walk away without understanding why a no is no, you will lose. Instead, find out why. I recommend this for when you get a yes as well. if you don’t know why someone acts the way they do, you cannot learn from it or replicate in the future. Check out that interview here.

2. Create a relationship with a banker

Banks aren’t in the business of funding your idea, but without them, it can be tough to survive. One of my first interviews was with Tony DiSilvestro of YNot Italian and he urged all businesses and those looking to get into business to create a strong relationship with a banker. I can attest to this, by having a relationship and a strong one with a banker it’s as simple as picking up the phone and requesting what you need. These bankers won’t just give you cash if you don’t fit the bill, but they will guide you throughout the path and introduce you to potential clients.

3. Five generations in the workforce

My very first set of interviews was with Regent Professor, Dr. Gary Oyster. People talk about baby boomers and millennials in the workplace. But I learned that for the first time ever, there are five generations in the workplace. What this means is there are five different generations of people, employees, and teammates that you will have to learn to work with. Millennials (they say) like to work in open areas with bean bags and puppies, while baby boomer prefers their corner offices and office cooler talk. By understanding who wants what can be the key to a successful workforce.

4. Track what you are doing

If you know me, you know that I am not a huge fan of business plans. Why? Because when you are first getting starting they are simply a guess. Instead, I like businesses to focus on addressing pain points, finding target markets and learning what prospects want. But, Jim White of Jim White Fitness led me on to LivePlan an online software to track where you were and where you are today.

5. Working a day job and having a company is ok

When starting your business, it is okay to have another career to ensure you keep food on the table. This is something, Dwayne Thompson of Sabrosa Foods nails, but so many up and quit their current jobs instead of creating a more likely and successful path.

6. Even if you aren’t faithful, listen to Joel Osteen

This didn’t make the final cut, but talking with Shawn McDonald of Feedback, I learned that while she isn’t very spiritual, she does listen to Joel Osteen because of his positivity. Which makes sense, starting a business can be a lonely place. Heck, it’s one of the reasons I started Hatch.

Chef Chris Hill saw an opportunity in growing his personal brand through using the social media juggernaut Facebook. Since inception, his page has grown to over 130,000 followers by creating content that chefs and cooks are interested in.

Failure is one of the hottest and worst words in the world of business. We all know that failing is quite common, but what do we do to embrace failure. As agency owner of Grow, Drew Ungvarsky states, he embraces failure, knowing that it’s likely to happen anyway.

Forever, having a patent was one of the single most important functions to a business. Today? It is still important, but harder to get and expensive. Many are testing ideas first, getting traction and once they have substantial traction, going after a patent. Mike Vahey, says you get a piece of paper and 15 thousand dollar bill. The important thing is to sell your product, not worry about a patent or not.

10. “50 percent of your business is image. Everything is image, how you bring yourself.” — Curvaceous Boutique

11. You have to have something that differentiates you from the competition

For Randy Williams of Talley & Twine, he learned early on he needed something to be different. He focused on creating high-end watches with a unique twist. The place a 7 on the side of the watch. Williams also learned through YouTube University how to source using Alibaba.

12. If you want to succeed, you need to get out of the office

Biz Connect leader, Laura Henderson, while talking about networking says if you think you can grow your business by not getting out the office you are wrong. Instead, you need to get out in front of it and win the day!

13. Ask for a chance and someone will give it to you

Martin Joseph of 360 IT Partners in high school asked a business owner to teach him about the IT field and little did he know at the time that he would eventually start his own IT business years later. The story here is to find people who have been there before and learn everything you can from them.

With every conversation I have, I try to learn as much about the person I am communicating with as possible. Am I missing your favorite segment? Let us know in the comments.