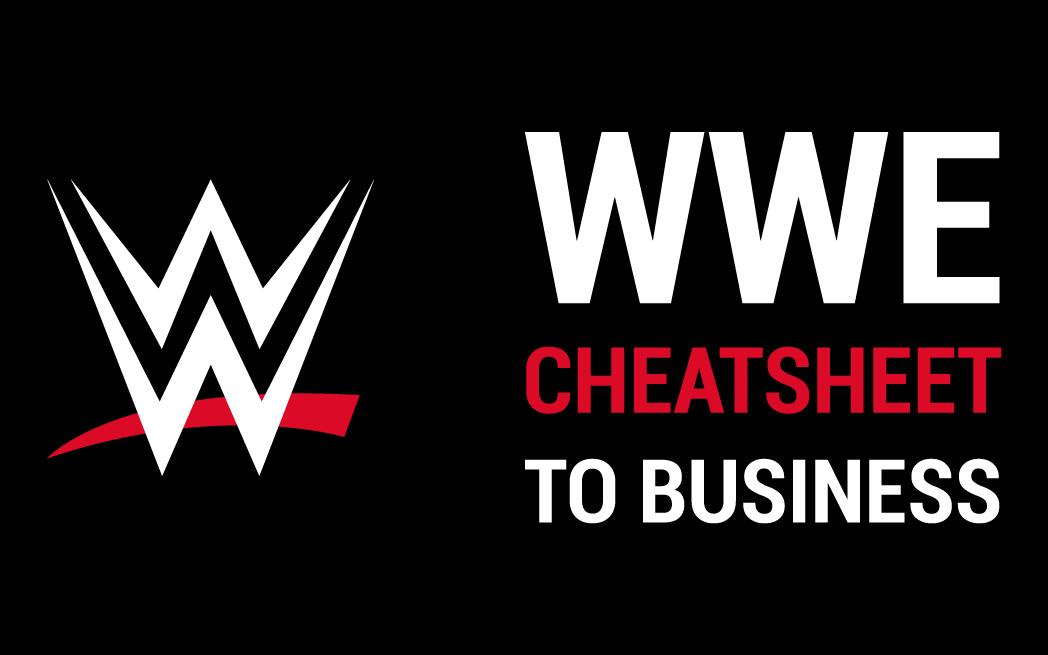 I have a confession to make. I am a 32 year old wrestling fan. Embarrassed? NO. I can’t remember the first time I picked up watching action in the squared circle, but I remember being obsessed with the Monday Night Wars back in the 90s. WWE and WCW were all I could think about. I even had swag for NWO, Sting and D-Generation X. If you don’t know what or who I am talking about, no worries, think of them as the NFL or NBA and Peyton Manning, Brett Favre, Michael Jordan, Steph Curry or Michael Jordan. 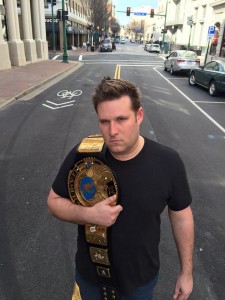 One Monday night recently, I realized how good WWE is at creating and selling content. I opened up my Field Notes pad and begin taking notes.

And don’t be fooled, WWE is a billion dollar publicly traded company that has revolutionized the way content is consumed both in-person, online and on tv. Vince McMahon completely changed the way wrestling is produced and took huge risks in going global, and has accomplished a ton by doing so. A billion tons. Wrestling thirty years ago was produced in territories or regions say, Mid-Atlantic, Texas, Memphis or Atlanta, McMahon bet on bringing all the territories together.  Here is WWE’s Cheat Sheet To Content and its Distribution.

While WWE doesn’t call it levels on talent per-say, they defineltly have tiers. Their big name talent gets a lot more tv time and they tease throughout the day about who will be on the show and who or what they may be doing on the show. Example: John Cena will be on RAW tonight to discuss his big win at WrestleMania against Rusev, which is what they may open the show with as a tease and then not actually have Cena appear until the 9 o’clock hour when more people will be watching or even tease multiple times throughout the show to be the headline at the very end of the card or evening program. This allows build up and people to get excited about it.

USA Network, PPV, Twitter, wwe.com, YouTube, Facebook and on and on. The core content is video, but they leverage and use almost every platform out there. When they announced the WWE Network in 2014, they made it accessible to PlayStation, XBox, Smart TV’s, Chromecasts, App Store, Google Store, Apple TV’s and continue to add new platforms as they are created. By being cross compatible WWE is able to use those networks to their advantage and prospects and customers can search to find the WWE content on demand and all over the world.

For almost 30 years, if a viewer wanted to watch the best matches in the world, on the top nights of the year, they had to pay for it. Pay-Per-Views, (what an original name) were an option that wrestling syndicates would create to make even more money from a national and global market. Pricing ranged from $20-80 depending on the event.

In 2014, WWE introduces their own network, which for $9.99/month would give users access to all PPV’s and almost all of their historical content. Before they came out with the network, they only way you could really get access to matches of the past was buy purchasing vhs (yes), dvd’s or online access through sites like Amazon or Netflix.

To pump up the crowd, WWE will have dark matches or bonus content for fans, they do this for fans to get their on-time, but also to get fans jumping up and working on their best yes, yes, yes chants. By doing this, fans show up hours before hand, which is good for tv and it also gives them a sense of extra material that they did not pay for. +1 for the fans!

One of the coolest features to the WWE content is when their talent communicates with their fans. How often do you comment on a social media post and nothing happens or call someone on the phone and nothing. WWE encourages fans to interact both in person and online and they 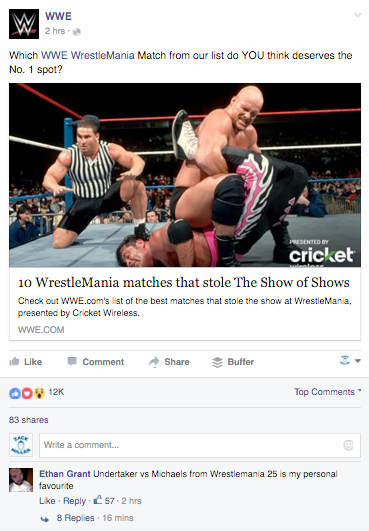 Don’t leave me hanging bro. You see it all the time, but not in WWE. They engage right back again and again. It’s truly a communication tool between talent and fan base.

More Social Followers Than Any Other Sports Organization

Yea, I didn’t believe it either, they beat Twitter, Google, ESPN and others. 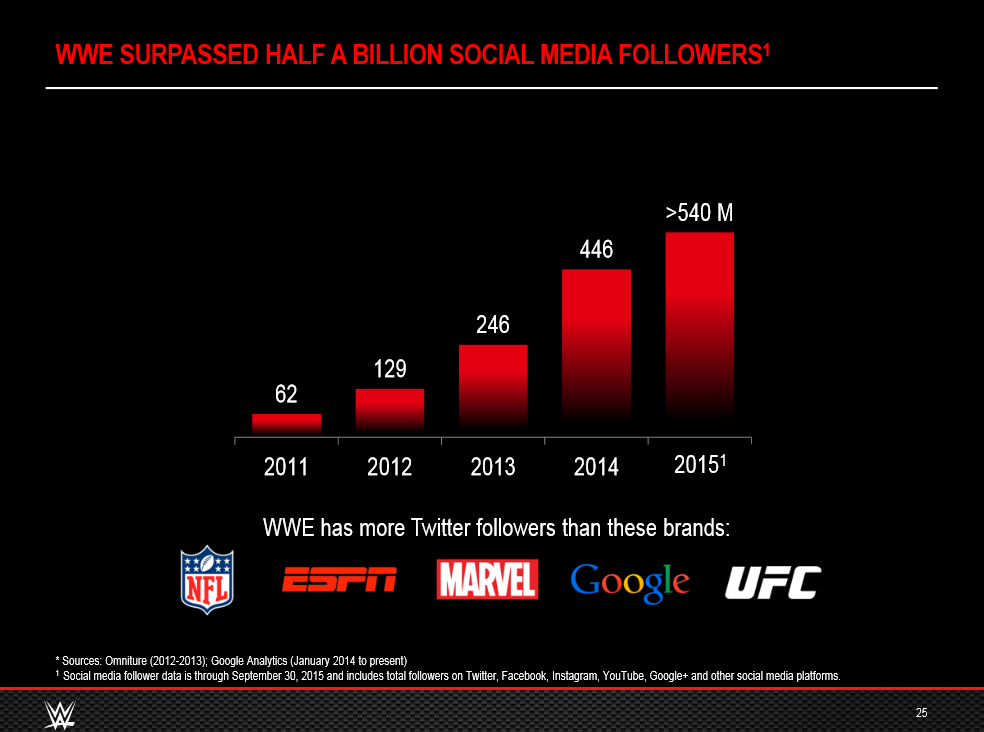 and a 99 point Klout score. 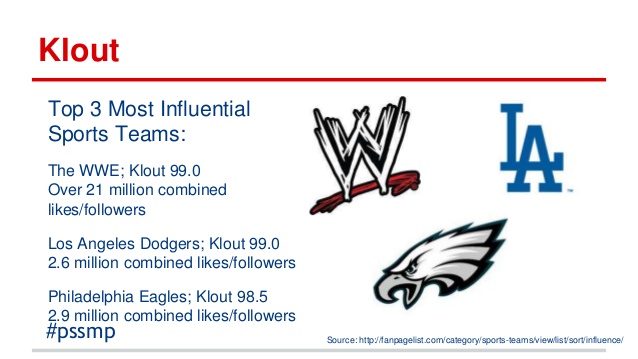 In business, people like to hear stories and personalize why someone is doing the thing that consumes hours of their day. WWE is broken up into several different pieces of talent (or wrestlers) and each has their own story or brand.

In order for a brand to resonate with customers, it has to have a story behind it.  A brand is much more than a logo and tagline. A brand is a living thing. As dynamic as a human being, a good brand must have a personality and values. When you personalize a brand in this way, it allows your users to develop expectations that deeply resonate with your customers. You want to be able to have an emotional impact on your people, and the best way to do that is branding and good story telling.

When you are promoting your business or communicating, don’t always JUST use that medium. Instead, engage with folks on the platform where they are. For example, below is an email reminder about a  HUGE match seven days away. Why? Because 1.5 million viewers/subscribers are being reminded of something WWE wants them to see. 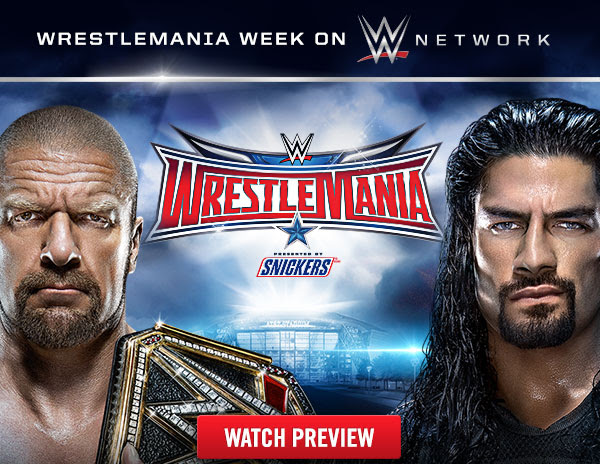 This is also true with comments on YouTube and other social networks. WWE is constantly trying to build their brand to tune in when they have longer content. They do this by pushing tease or short bursts of content.

Use Guests For More Exposure

Snoop Dogg, Arnold Schwarzenegger, Ray Charles, Mr. T and many more? Why, these ‘outsiders’ have brands worth millions of eye ball. They incorporate these new eyeballs into their content and hopefully create new fans that watch every eek because they love the entertainment that is WWE.

If you are familiar with guest blog posts, this is a similar approach, maybe even the original gangsta of guest content. I will dig deeper to see who was first. I guess late night talk shows do this too.

Bring Back Past Champs

During the year, one strategy WWE uses is to bring back retired champions. They do this so they can promote that one of the best of all time is coming back. For their big events like WrestleMania, you will see WWE bring back several past champions, even if they are only on for a few seconds. For WrestleMania 32, WWE is bringing back The Rock. If you were looking for a way to do this in your business, use previous clients in your promotions and collateral. Likely you have a customer that people have heard of, so buy promoting them and attaching to your brand, you are showcasing and doubling exposure.

Not Afraid To Upsell

T-shirts, live events, WWE Network, and Pay-Per Views to name a few. Every month, WWE hosts Pay-Per-Views where customers can purchase access to a single event or they can signup for the network. If you see through all of their content, they have a ton of call to actions encouraging visitors and viewers to get exclusive access, free for one month and then just $9.99/month.

They have created jokes on the upsell attempts. 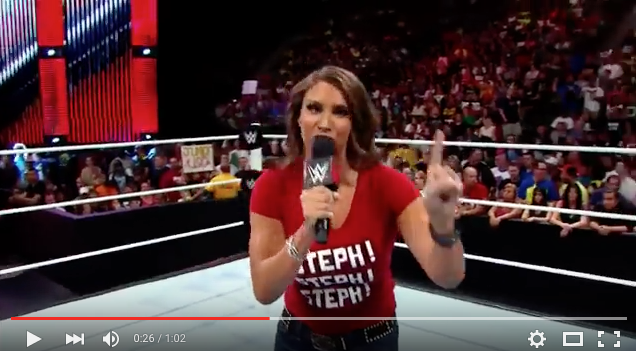 Ton Of Value For Free

3 hours every Monday, social media posts with quick hits, Smackdown on Thursday and much more.

Not to mention they give away their network away for free for month, knowing that customers will stick with it because the content doesn’t suck.

Theme Music From Up and Coming and Popular Musicians

Similar to leveraging famous people, by using theme music from popular bands and musicians, WWE is able to promote and use these chord creating magic into their branding. Think about it 30 wrestlers at every event (RAW, Smackdown, PPV, etc) are provided music talent from some of the best artists in the world. These musicians also perform at events like America The Beautiful at WrestleMania, Skylar Gray and Flo Rida. WWE embraces music and incorporates in to their packaging.

A lot of people are afraid to communicate and market their company. Stop. You need to tell people what you are doing and not just once. The image below is what WWE is showing tonight alone and then the far right graphic is an upsell. If you look, they have 3 call to actions, they also promote by showcasing on multiple channels.

How much traffic do they receive? Monday Night Raw has three million viewers, their network has over 1.1 million subscribers at $10 bucks a month and according to Alexa, WWE has 17% of their viewers watching the network with 77% viewing the main site.

At the end of the day, WWE takes risks and produces a ton of content. But they don’t just produce, the SELL. And the SELL hard, because they realize that the content game, is a numbers game. If you are in the content game, which every business should say they are in some capacity, be sure to do two things, produce kickass content and share it early and often.

Even better, we found a way to champion the businesses we work with, who once they achieve their goal get to where an attitude era belt. We had a champ yesterday. 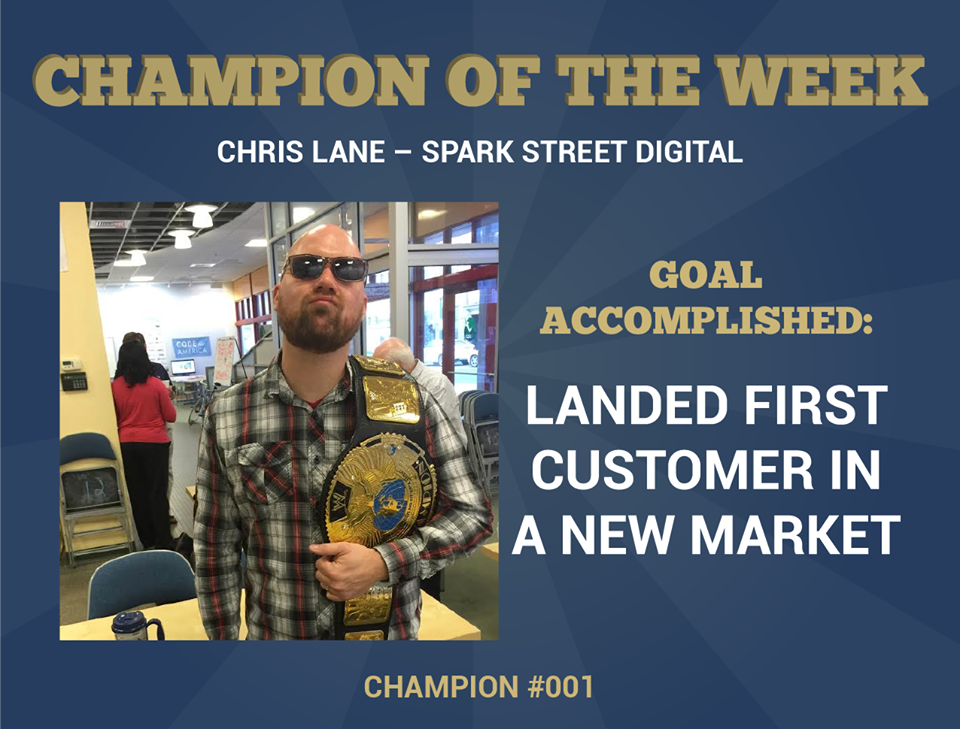